Excerpt: "...he comes along with his equipment...and was able to accurately tell where it was" After two weeks of rescue efforts, Molly, the cat that sparked a media frenzy in New York City was finally pulled out from a spot between two Greenwich Village buildings.

The low-key drama, with no end in sight, was playing out in the basement of Myers of Keswick, a delicatessen where Molly had been official house mouser until she wandered into a narrow space between walls and became lost. Mike Pastore, field director for Animal Care & Control described the space as as "a maze of beams and pipes, going every which way."

Alan Fierstein of Acoustilog first heard about the story on Friday, day 14. It was reported by Associated Press that the cat was “sending out distress calls from a few feet — or maybe just inches — away” and that “Molly's meowing could be heard so clearly on the sidewalk outside the building that it seemed she might be a foot or less inside the wall, though blocked from view by vertical studs and other obstructions.” When Fierstein stopped by on Friday afternoon, he found workers concentrating their efforts in the basement, where they had made numerous holes. 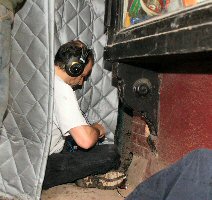 Read the article in The Villager
Fierstein said, “When I heard that story, I knew from experience that people often mistake the direction of a source of sound, so I decided to drop by and give them my card. Mike Pastore was enthusiastic and asked for my help. I was told that the cat was suspected of being somewhere in the basement, or possibly in the very front of the two wooden storefronts on either side of the 6” crawlspace between the two brick buildings. They told me that the cat meowed every day at 6 PM, so I promised to come back then. I brought a special blanket to create an-ultra quiet chamber to the crawlspace that the rescue workers draped around me like a cocoon, and then made everyone on the sidewalk quiet down. The news media cooperated by shutting off the generators on their trucks. ”

Read the Article in
Cat Fancy Magazine
“I then used a piece of acoustic test equipment called the Stethobel, a type of electronic sound-locator I developed 10 years ago, to quickly rule out the storefronts and the basement as the source of the meowing. The news crews loaned me an extension cable and a long telescoping tube so I could snake my microphone 8’ back into the crawlspace. By 7 PM, I told Mike that the cat was not in the basement and was located deep into the crawlspace, not right at the front as it had seemed. Unfortunately, there was a mountain of rubble in that area, from years of garbage being thrown down between the two buildings. I felt the cat must be trapped in that area, or perhaps in a brick hole to the right of the mountain. If it was in the mountain, it could be up near the top, far from where they had been drilling in the basement.” 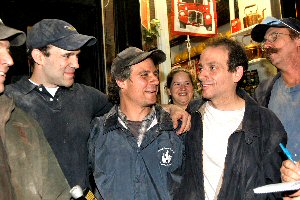 Armed with that information, rescuers looked backwards, rather than down or forwards, through a ground level hole in the wall to the crawlspace. At 8 PM, one of the volunteers spotted Molly’s eyes, moving slightly next to an old gutter pipe lodged between the two brick walls, high up in the mountain of garbage. This was almost at the ceiling of the store near the 2nd floor of the building, not near the basement where they had been looking for 2 weeks.

Two articles in the N.Y. Post:
Lucky Molly's in the Lap of Luxury
Purr-Fect End

Acoustics Helps Rescue Molly, New York's Cat-In-The-Wall
Fierstein said, “I was really afraid of collapsing the rubble on what must have been, up until then, a just-adequately sized survival space. I suggested drilling in from the side brick wall to prevent any dislodging.”

Pastore was able to convince the store owner to allow a hole to be drilled through the inside wall of the shop near the ceiling. It took Kevin Clifford, one of the volunteers, 2 hours to drill out a single 12” x 24” hole right next to the mountain of garbage. Molly was found between the drain pipe and the right side of the brick wall. Kevin grabbed her and pulled her out just after 10 PM. The crowd on the sidewalk cheered loudly. Her condition was surprisingly good, having used up only one of her lives, and she ate and drank right away.